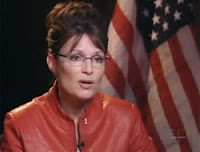 Sarah Palin sat down for an interview with Univision's Jorge Ramos for her first and only nationally televised interview with a Spanish-language network.

While staying mostly on script, Palin did offer views on a few issues which have not been heard on English-language press. Needless to say, Freepers are not happy.

(Link to the 7 minute interview)

1) Palin supports a path to citizenship for undocumented immigrants "because I understand why people would want to be in America. To seek the safety and prosperity, the opportunities, the health that is here."

2) Palin believes parents should talk to their teenage children about birth control, and invites them to use her as an example as to why they should.

3) Palin shared this cryptic message from her Iraq War deployed solider son: 'Mom I can't tell you over the phone some of the things that we see over here.'

The following are a few excerpts:

Ramos: Governor, let me ask you about immigration. How many undocumented immigrants are there in Alaska?

Ramos: As governor, how do you deal with them? Do you think they all should be deported?

Palin: There is no way that in the US we would roundup every illegal immigrant -there are about 12 million of the illegal immigrants- not only economically is that just an impossibility but that's not a humane way anyway to deal with the issue that we face with illegal immigration.

Ramos: Do you then favor an amnesty for the 12 or 13 million undocumented immigrants?

Ramos: To clarify, so you support a path to citizenship for undocumented immigrants?

Palin: I do because I understand why people would want to be in America. To seek the safety and prosperity, the opportunities, the health that is here. It is so important that yes, people follow the rules so that people can be treated equally and fairly in this country.

Ramos: Your son has been deployed to Iraq. What has he told you over the phone about the war?

Palin: He's good. You know what he has told me? He said 'Mom I can't tell you over the phone some of the things that we see over here' but you learn really quickly not just about your self when you are over here and I look forward, of course, to getting to speak with him in person after his year of deployment it's up.

Ramos: Do you think that we should talk about birth control with our teenage sons and daughters?

Palin: Yes. Use me as the example of why you should, even more admittedly. My daughter, of course she is 18 years old, but has really been forced to grow up very quickly now and starting her own family and you know, life has changed so quickly for her. And she is a good and responsible and a very kind-hearted young strong woman, and she is going to be just fine. But if we can use this, and if my daughter Bristol can use her story as a kind of teaching tool for others, then so be it. Let us do that.