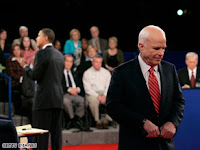 The 2nd Obama-McCain debate is over -- and so is the race for president. Barring a direct meteor hit, Barack Obama will be the next President of the United States.

McCain needed a game changer and he didn't come close. Instead, he looked old, sounded cranky at times, and even looked infirmed. But more importantly, his grasp of the issues and his solutions were at best too general, and at worst, too much of the same.

McCain needed a knockdown but be barely landed a punch. It's no wonder that the Republican pundits on television are unhappy with McCain's performance. For example, Leslie Sanchez and Alex Castellanos were frustrated with McCain, complaining that the senator missed numerous opportunities to score points.

While the debate was as I expected, fairly genteel, and the candidates stayed largely within the talking points, McCain did offer two surprises. One is that he believes that Social Security benefits will have to be curtailed. Ouch!!! This seems like an especially tone-deaf proposal given the poor stewardship of his party and the resulting levels of insecurity.

The other McCain proposal, which would costs 100s of $billions just for teetering subprimers, is to have the government purchase all the bad mortgages and reissue new ones at the diminished value of the homes. And which agency would buy the loans? FannieMae and FreddieMac -- the agencies McCain and the rightwing has been railing about?

This mortgage purchase proposal (which, btw, is along the lines of my own alternative bailout plan) must have conservatives re-evaluating their support for "mavericky" McCain. But it also clashes with his point that it's Obama that's the big spender. His mortgage bailout idea, together with the cost of more wars, and his huge tax cut proposal for corporations and the rich, hugely dwarfs the costs of Obama's proposed investments (in energy innovation, health care and education).

Related Links:
Obama-McCain Round 2: Wingnuts Need a Knockdown
at 10:19 PM