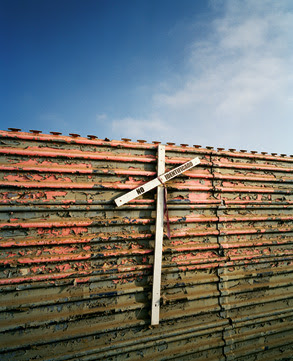 A BORDER WALL SEEMS TO VIOLATE a deep sense of identity most Americans cherish. We see ourselves as a nation of immigrants with our own goddess, the Statue of Liberty, a symbol so potent that dissident Chinese students fabricated a version of it in 1989 in Tiananmen Square as the visual representation of their yearning for freedom.

Perhaps the closest thing to the wall going up on the U.S.-Mexico border is the separation wall being built by Israel in the West Bank. Like the new American wall, it is designed to control the movement of people, but it faces the problem of all walls—rockets can go over it, tunnels can go under it. It offends people, it comforts people, it fails to deliver security. And it keeps expanding.

But then, as in many conversations on the border, the rhetoric calms down. Duley, along with many other Naco residents, believes the real solution has to be economic, that jobs must be created in Mexico. There is an iron law on this border: The closer one gets to the line, the more rational the talk becomes because everyone has personal ties to people on the other side. Everyone realizes the wall is a police solution to an economic problem. The Mexicans will go over it, under it, or try to tear holes in it. Or, as is often the case, enter legally with temporary visiting papers and then melt into American communities. Of the millions of illegal immigrants living in the United States, few would have come if there wasn't a job waiting for them.