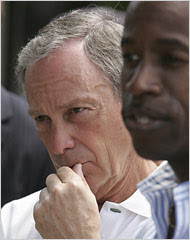 Is New York City's Michael Bloomberg (and prospective independent candidate for president) the only major political figure in America speaking clearly and making sense on the issue of immigration?

Here's what he said on the issue after yesterday's Memorial Day parade in Laurelton, Queens as reported Anthony Ramirez for the NYTimes:

Shame on Congress, who can’t get together [on the immigration issue].

The guest-worker program is a joke. Nobody’s going to go home for a year and come back. Nobody could ever enforce that. Nobody in their right mind would ever try to do it.

It would destroy the economy if you deported them. They are here, yes, against the law, but they’re here with the complicity of the U.S. government.

Having something that gives them permanent status and some road to citizenship is a big step forward. You don’t want that road to be so impossible that they can’t do it.

Email ThisBlogThis!Share to TwitterShare to FacebookShare to Pinterest
Labels: Immigration