First They Came for the Latinos 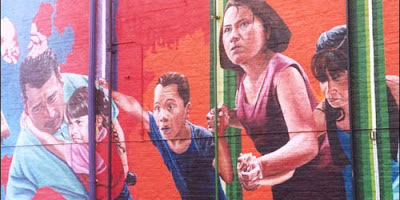 Heard rumors of civilians rounded up, locked up, and searched for papers, lately? Don't worry. That only happens in another America.

The Moment of Truth: First They Came for the Latinos (by Jeff Dorchen, PopMatters - May 10, 2007)

Much better just to cordon off an area where everyone’s Latino. Take the Little Village Discount Mall, for example. You can’t be accused of harassing only the Latinos in the mall, you’d be harassing everyone – it just so happens that everyone’s Latino. And even better: if you do it during business hours, you can be pretty sure that almost no one you harass will be some easily-ruffled art patron, paralegal, or clerk of the Cook County Recorder of Deeds. No, almost everyone is low-income, and unconnected with anyone more powerful than the manager of a grocery store. All right, if you’re really unlucky you might harass the relative of an alderman. But the alderman of Little Village is going to be Latino, too.

See, all you really want to do is make sure anyone who’s going to complain is Latino. That way, anyone from the rest of the population watching TV who sees people complaining about Gestapo tactics will see only people who look like brown immigrants. And they’ll say to themselves, “There go all those brown immigrants who come to take our jobs, complaining about America again. If they don’t like it, why don’t they go back where they came from? You know, to that other, not as good America.”