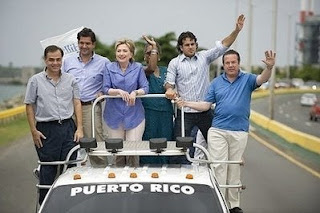 So what happened to Obama in Puerto Rico? Why didn't he perform better? Afterall, he told Boricuas that he too was an islander, spoke Spanish, and even toured Ponce, the authentic city.

Yet, Hillary won in convincing fashion: 68% to 32. Where did Obama go wrong?

Political pundits have various theories, but they all assume that he seriously competed. But what if he didn't--by design? What if the real objective was to tie Hillary and company down in Puerto Rico so Obama and his strategists could focus on their priorities, i.e., Montana, South Dakota, Florida and Michigan?

My belief? We may have just witnessed a political headfake. A trick familiar to any basketball player, including Obama. The Obama camp gave the illusion of seriously competing for Puerto Rico, but spent their time and money elsewhere.

This tactic may have allowed an additional benefit of dampening voter enthusiasm. People in Puerto Rico (and elsewhere) are more likely to turn out if they can see and feel a true competition. Without the promised battle of the titans to excite, many Puerto Ricans lost interest. A weak voter turnout effectively denies Hillary the possibility of gaining a triple digit vote advantage.

A third benefit to the freeing of Obama's brain trust to focus on this weekend's DNC rules committee meeting. Anyone watching the proceedings could tell that the Clintonistas--who were thought to own the rules committee--were being maneuvered. The pro-Obama outcomes did not occur by happenstance.

(An alternative view is that allowing Hillary to dominate in Puerto Rico may be part of a "negotiated" exit strategy. That is, allow Hillary to leave on a high note, and to do so with a constituency that doesn't matter in terms of national elections, but is important to a New York politician with an eye on the next election.)

Clinton may have won a light primary in Puerto Rico, but it seems to me that she lost the wider war.
at 5:45 PM