Sonia Sotomayor: A New Yorker to the Core 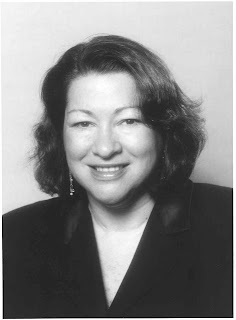 The New York Times describes Sonia Sotomayor as “a daughter” of The Bronx who “claims the Brooklyn Bridge as her power-walking trail, the specialty shops of Greenwich Village as her grocery store, and the United States Court House as the setting for her annual Christmas party.”

Juan Sotomayor, a doctor who lives near Syracuse, says his sister Sonia is as much a New Yorker as she is a Latina (“it’s her essence”). “I always joke that her vision does not extend beyond the Hudson River.”

Ms. Sotomayor, a high-achieving student among high achievers at a Catholic high school in the Bronx, ventured outward to Princeton and Yale. Her return to New York, in which she was filled with ambition and drive as ferocious as the city itself, fit a familiar narrative. Often, friends say this image lingers in their mind’s eye: Ms. Sotomayor poring over law books and legal papers. Some days, she has said, it is hard enough to find time to sleep.
at 1:30 AM