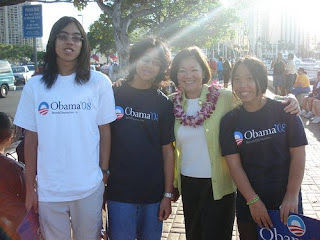 Here's a nice photo of Congresswoman Mazie Hirono (D-HI) and some of her constituents.

An immigrant from Japan, Hirono represents Hawai`i's 2nd Congressional District, a district that is the greatest distance from Washington, D.C., and covers seven populated islands and Kaho`olawe an island destroyed during decades of bombing practice by the U.S. Navy.

In 1994, Hirono and her running mate, Benjamin J. Cayetano, were elected to an historic administration. Hirono became the first Japanese immigrant lieutenant governor, and Cayetano, the first Filipino American governor.

In 2002, Hirono ran for governor against Republican Linda Lingle in Hawai'i's first all-female gubernatorial contest.
at 6:41 AM