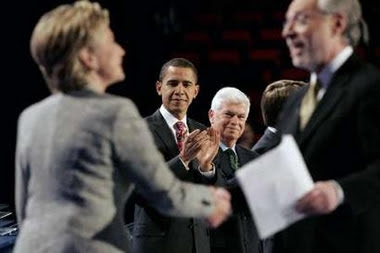 It was a dreadful 2 hour demonstration of:

1) why CNN has been in a tail spin as a "news" organization; and

2) how Clintonites get over on CNN's hapless Wolf Blitzer.

1) After flip-flopping on the question of drivers licenses for undocumented immigrants in New York, Hillary got away scott-free when the question was revisited last night. Dumb Wolf accepted Hillary's newly adopted opposition to licensing undocumented drivers without so much as raising an eyebrow.

It's like McCain or Giuliani suddenly announcing absolute opposition to the Iraq War and Wolf ignoring it and moving onto another question.

2) The audience was clearly stacked for Clinton because a chorus of boos would descend upon only Obama and Edwards, but Hillary's silliness would be applauded. Pretty obvious what was going on.

3) Nothing better captures the farce of the so-called debate than the final question posed to Hillary by a very silly Nevadan Latina: "Do you prefer diamonds or pearls?"

Clinton's answer? "I want both."

The Clinton camp's assessment of Wolf's performance? "Outstanding." No wonder so many people refer to it as the Clinton News Network.