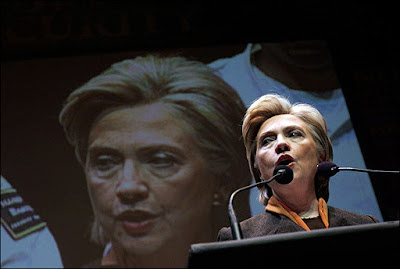 While Republican Bobby Jindal, the nation's first East Indian-American governor, was sworn in Monday in Louisiana, Democrat presidential candidate Hillary Clinton and her associates have been deploying a despicable "racialized" Southern strategy.
Of course, the Clinton's are denying that they're using racist tactics to peel away white white Southern votes from Obama. But to those of us paying attention, it's exactly what they're doing. Daily Kos'rikyrah is onto the Clintons--as are many African American bloggers, including Prometheus 6, who observed:
I believe they are trying to bury the email forwarding, Bill Shaheening, Bob Kerreying, 'Pig' Penning that Hillary approved. They're trying to make the controversy about the MLK comment (which was ambiguous) instead the the Southern Strategy she's been implementing.
The Clintons are banking on the press rolling over and/or failing to see the obvious. So rikyrah has taken it upon herself to create The Clinton Attacks Obama Wiki, an incident tracker of the racial insults hurled at Obama by the Clintons and their surrogates. As a wiki people are free to add to the list as new incidents occur.
Here's the list as it stands:
#1 Barack Obama May Have Been a Drug Dealer!
#2 Actually, LBJ Did it
#3 I can't make her...
#4 Imaginary Hip Black Friend
#5 Mandela
#6 Shuck and Jive
#7 BET Founder Bob Johnson Attacks
#8- Three Volunteers Resign for Spreading MADRASSA EMAIL
#9-Bob Kerrey and his Dog Whistle
#10- ' Beautiful Symbol'
#11- 'Fairy Tale' & 'Kid'
#12- ' False Hopes'
#13- The Charlie Rose Interview
#14- "I just don't want to see us fall backwards"
#15 - Andrew Young Says Bill is "every bit as black" as Obama
#16 Clinton Team Quietly Raise Obama's Cocaine Use
May
#17-Geraldine Ferraro
#18- Charlie Rangel
#19-Rangel: Obama put drug use in book to sell books
#20- The 'Spadework' Comment:The Today Show
#21- The ' Spadework' Comment : JULY 2007
Related:
Hillary & Tara Plantation Politics
at 12:54 AM