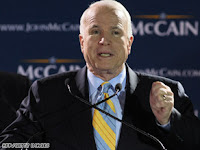 This move a year ago by Florida's Latino Congressional Delegation's to embrace and endorse John McCain was not only risky but has proven to be brilliant. The Latino support, along with the move-up of the Florida Primary, were key ingredients in today's smashing victory by McCain against Florida-friendly Rudy Giuliani and Latino unfriendly Mitt Romney.