Angelina and Banderas in 'Cuba' 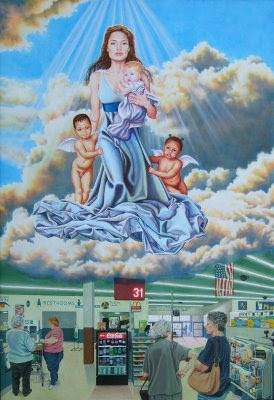 "Blessed Art Thou" by Kate Kretz is supposed to symbolize good and evil: Angelina is angelic; Walmart, satanic. Just a tad simplistic; and for many, sacrilegious to boot!. Politics aside, I like it because, well, it's of Angelina and I like her. Not only is she beautiful but she's a fine actor as well.

That brings me to the real purpose of this post: Original Sin, i.e., the movie. It stars Angelina and Antonio Banderas. Banderas is a well-to-do landowner and Angelina is his mail-order bride. But in an interesting twist it turns out that Angelina is not the person with whom the lonely Banderas' fiance. They immediately marry, he falls deeply in love with her, and then her secret life begins to emerge. Banderas learns that Angelina is not whom she claims to be and may in fact may be the murderer of his fiance.

What's intriguing is the movie's setting in late 1800's (or early 1990's) Cuba. The filmmakers attempted to give an authentic feel to the Cuba life. The landscape, music, harvesting of coffee beans, the clipping of a Cohiba, the breakfast cappuchino and the people surrounding the Hacienda created an interesting environment. There were also Afro-Cuban servants, the American Southerner, the catty society lady, and backstreet characters.

Since the movie is about the relationship between Banderas and Angelina, it doesn't really matter what the setting is. But since it is set in a place and time that's of interest to American Taino, it's hard not to notice a few odd things about the characters and the backdrop.

One is that the Banderas character is a wealthy and hugely handsome Hacendado, but his only recourse for attracting mate is via mail order? With all of the lovely and available Cubanas, this guy has to import an unknown and unattractive (the fiance was very unattractive) woman from the states? Maybe it would've worked had the male actor been played by a wickedly unattractive actor, but Banderas?

Also, Banderas is so nice that it seems almost impossible. I'm only guessing but I that running a coffee plantation is a hugely complex undertaking requiring many executive type decisions. But Banderas seems to float from one scene to the next as if he's a well-to-do guest at a fancy hotel. I don't think so.

The other is that the servants are all just so happy. Servants in that era were thisfar removed from slavery and hacienda labor was difficult. Banderas actually asks an especially giddy servant what's so funny, but we never learn. It reminds me of those American black & white movies where the servants always wore big grins and also seemed to be tad too happy. It seems inexcusable that today movie makers still portray black servants as giddy simpletons.

Finally, I would think that a successful business man in Cuba around the time of the Spanish-American War would be greatly affected by the colossal change in the country's politics, business and culture.

Even with its major flaws, I still recommend the movie. There's something about Angelina in almost any role, any movie that makes the experience worthwhile. I also do love that its set in Cuba. However, I really wouldn't mind watching a period Cuban movie with greater authenticity.
at 9:39 PM