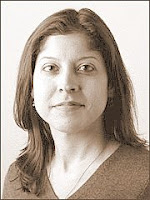 My new favorite columnist/blogger is Helen Ubiñas of the Hartford Courant! Why? Because she's given Chris Dodd, the powerful U.S. Senator from Ct. a well-deserved cocotazo -- something the media bigwigs have failed to do.

Dodd has sought to evade any responsibility for his role in the AIG bonus scandal even though he runs the U.S. Senate Banking Committee. But Ubiñas will have none of it! She rightly skewers the silver-haired, life-time pol in her column, There's No Bonus For Lies, Sen. Dodd.

So, who is this amazing Latina? Here's a short bio:

Helen Ubiñas was born in New York and received her bachelor's degree from Boston University. She began her career in journalism in 1994 when she started with the Hartford Courant as a City Desk reporter and has held a number of positions there since, including Town reporter, features reporter, lifestyles and specialties reporter.

Since 2000, Ubiñas has been a columnist as well as a blogger (See Notes from Hel.).

She has been awarded a number of honors, including being a finalist for the Livingston Award for Young Journalists and a member of a team awarded the Pulitzer Prize for breaking news, both in 1999.

In 2004, Ubiñas was a member of a team awarded the Scripps Howard Foundation National Journalism Award for public service. In 2005, she was a finalist for her column writing for both the National Headliner Award and the American Society of Newspaper Editors Award. She was also a finalist for the Howard Scripps Foundation National Journalism Award for commentary in 2006 as well as a first place winner for her column writing from the New England Associated Press News Executives Association.

In 2008, she was awarded The John S. Knight professional journalism fellowship at Stanford University.