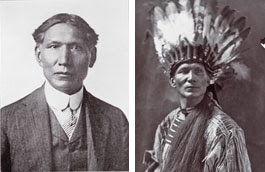 was a American Indian author, physician, philosopher and reformer. He straddled two worlds in his life and writing. The author of Indian Boyhood was raised in the traditional way after the 1862 U.S.–Dakota War. His father later persuaded him study Christianity, and attend medical school. But when Eastman served as a government doctor during the Wounded Knee massacre, he became disillusioned about Americans’ capacity to live up to their own ideals.

While Eastman’s contemporaries viewed him as “a great American and a true philosopher,” Indian scholars have long dismissed Eastman’s work as assimilationist. Now, for the first time, his philosophy as manifested in his writing is examined in detail. David Martínez explores Eastman’s views on the U.S.–Dakota War, Dakota and Ojibwe relations, Dakota sacred history, and citizenship in the Progressive Era, claiming for him a long overdue place in America’s intellectual pantheon.

“A compelling, innovative, and provocative reading of the work of Charles Eastman. Martínez has achieved a new and deepened understanding of the importance of Charles Eastman to his times, to Native intellectual history...”
Robert Allen Warrior, The People and the Word: Reading Native Nonfiction

“Martínez makes a unique contribution to the ongoing exploration of the early twentieth-century generation of Indian intellectuals, offering literary interpretations of historical texts and taking particular aim at the connections between intellectual history and philosophy.”
Philip Deloria, Indians in Unexpected Places

David Martínez is of Pima descent and he is an enrolled member of the Gila River Indian Community.
at 8:36 AM