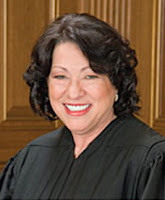 For all of the justifiable excitement over Sotomayor’s appointment, recall how the Republicans’ main line of attack was her often-repeated comment that she brought to the bench the perspective of a “wise Latina woman.” Both the White House and the nominee herself had to backtrack from this statement, as it raised the troubling notion — for the white-dominated media world — that Latinos may bring a set of experiences and perspectives otherwise lacking.

How can a traditional media that itself excludes Latinos, and that limits its signature political talk shows to white men, countenance a claim that a Latina has special insights about public policies?

Sotomayor’s comment hit a bit too close to home, which is why the media harped on it repeatedly, eventually forcing her to recant.

Such is the state of affairs as we celebrate Hispanic Heritage Month in 2009.

Randy Shaw is the author of Beyond the Fields: Cesar Chavez, the UFW and the Struggle for Justice in the 21st Century.
at 9:41 PM