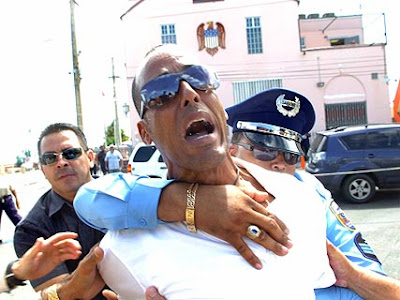 This man is being roughed by the bejeweled police officer for throwing an egg at Puerto Rico's rookie governor Luis Fortuño...who abruptly ended his press conference and scurried to safety.

But who should be the one arrested?

The egg thrower losing his job? Or the Republican governor who has fired 17,000 government employees (including class teachers) in the midst of Puerto Rico's worst recession/depression in recent memory?

In't Fortuño and his coddled class the real criminals here?

Clearly the ambitious Fortuño -- who snagged a primetime speaking slot in last year's national McCain-Palin convention -- is thinking ahead to a possible high level appointment in a future GOP presidency. Being tough on the people is clearly a requirement for high office as a Republican, right?

Meanwhile, Luis Raúl Torres, member of the Puerto Rico House of Representatives from the opposing Popular Democratic Party, has introduced an amendament to the Puerto Rican constitution allowing a recall election. A website poll shows 68% of respondents support the measure.

So while Fortuño's move may not be as crazy as it might appear to the rest of us, still firing people in this environment is beyond cruel even for a Republican.

However, it does prove that a lapdog Republican in the governor's mansion in San Juan, during a national recession, in a country led by the man you wanted defeated, is not good for island Borikuas.