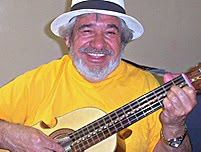 It is with great sadness and personal loss that I announce the death of un gran companero de lucha por los derechos de los puertorriquenos en EEUU/a great loss of a brother in the struggle of PRs civil rights Joaquin Rivera. He passed away from a heart attack in Philadelphia.

Joaquin was a resident of Philadelphia since 1965 and from a very early age he played guitar. He was a member of the Philadelphia Young Lords, the Puerto Rican Alliance and founding member of the National Congress for PR Rights (NCPRR). He was also the founder and leader of Los Pleneros del Batey, a group that performed around the country and at all NCPRR Convention including in Philadelphia last month. In addition, Joaquin was a counselor at Olney HS where he also was the faculty advisor to the Aspira Club for decades.

The PR community has lost a tremendous cultural worker but his legacy will live on. Pray for him and his famly".

With a heavy heart,
Victor Vazquez